Is Your Business Upholding Its Modern Slavery Act Obligations?

The passing of the Modern Slavery Act 2018 was a long-overdue acknowledgement that modern slavery is still present in Australia. Estimates suggest that up to 15000 Australians are living in conditions of modern slavery.

In addition to the local context, Australia’s primary supply chain is the Asia-Pacific region, where 25 million people are living in modern slavery. This regions number accounts for 62% of the modern global estimate, meaning Australian businesses are potentially involved in modern forms of slavery.

What Is The Modern Slavery Act?

The Act requires all corporations with annual consolidated revenue of more than $100 million to provide yearly reports on the risk of modern slavery in their operations and supply chain. Failure to report and take steps to avoid modern slavery will result in penalties, but just how seriously are businesses taking their responsibilities?

What Is Modern Slavery?

Modern slavery refers to a group of practices, including:

In 2018, Anti-Slavery Australia helped more than 123 people to get out of modern slavery. However, a report by the Australian Institute of Criminology estimates that only one in five victims are found.

Modern slavery is often tied to immigration, where people are coerced into leaving their home with promises of well-paying jobs. Upon arrival, they are forced into labour and threatened or deceived into continued work against their will.

The NSW Government has developed its own anti-modern slavery legislation, making it the first jurisdiction in Australia to do so. It is also the second jurisdiction in the world to provide for an Anti-Slavery Commissioner.

The Act hasn’t been legislated, but once it is active and enforceable, businesses found to be in breach of it could be hit with up to $1.1 million in fines. This punitive measure is vital in encouraging businesses to take the issue of modern slavery, and it is something the federal Modern Slavery Act should also adopt.

However, the reputational damage to your brand could be far more damaging than a $1.1 million fine. So, legislated punishments or not, every business needs to be looking at its supply chain to ensure it is not supporting any forms of modern slavery.

When investigating your supply chain, make sure you’re partnering with companies that have their own modern slavery framework, or at the very least a transparent employment model.

It’s harder to spot signs of modern slavery in overseas suppliers. With overseas suppliers, you need to build long-term and honest relationships, so you can get to know their business and do all the necessary checks to ensure they are treating their employees aren’t being forced into labour.

When dealing with local suppliers, there are some signs you can look for to ensure employees aren’t subject to slavery:

Responding To Elements of Modern Slavery In Your Supply Chain

The type of business you run and whether you cause, contribute or are linked to the example of modern slavery will determine how you should respond. The following chart was created by the Australian Government Home Affairs Department to provide guidance: 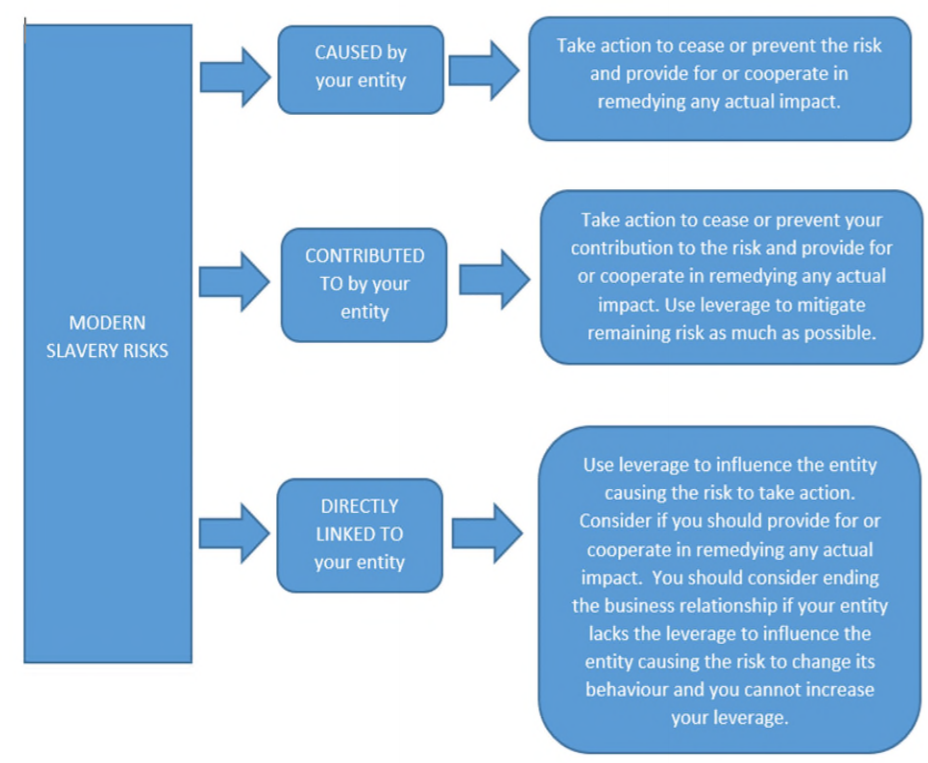 Use the checklists below to create a business plan for addressing modern slavery in your business operations and supply chains: 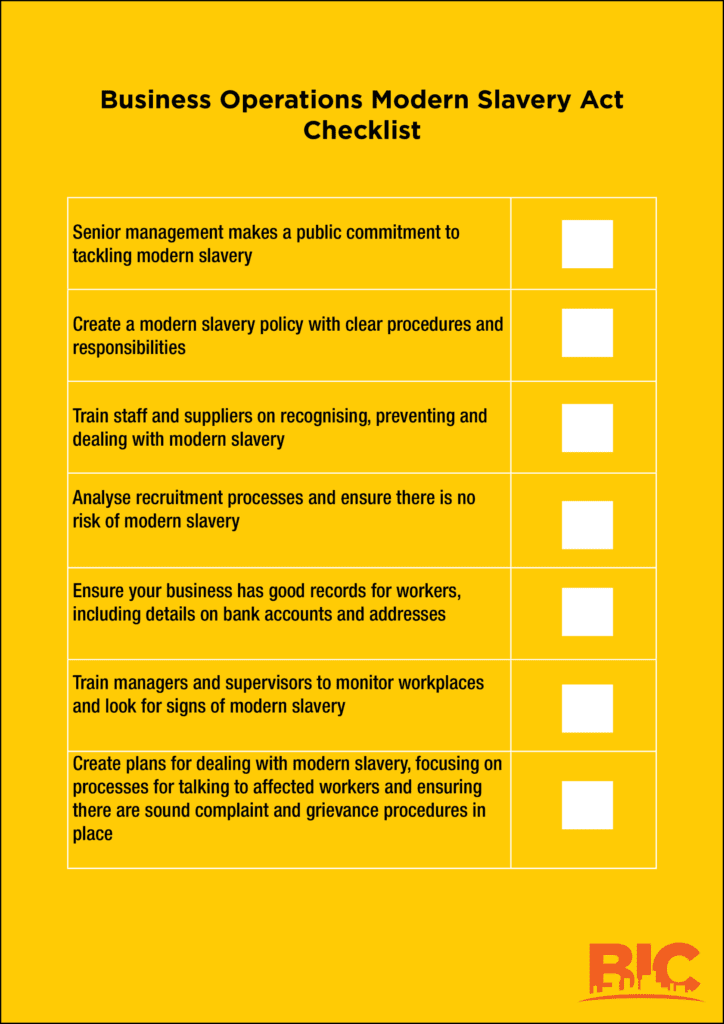 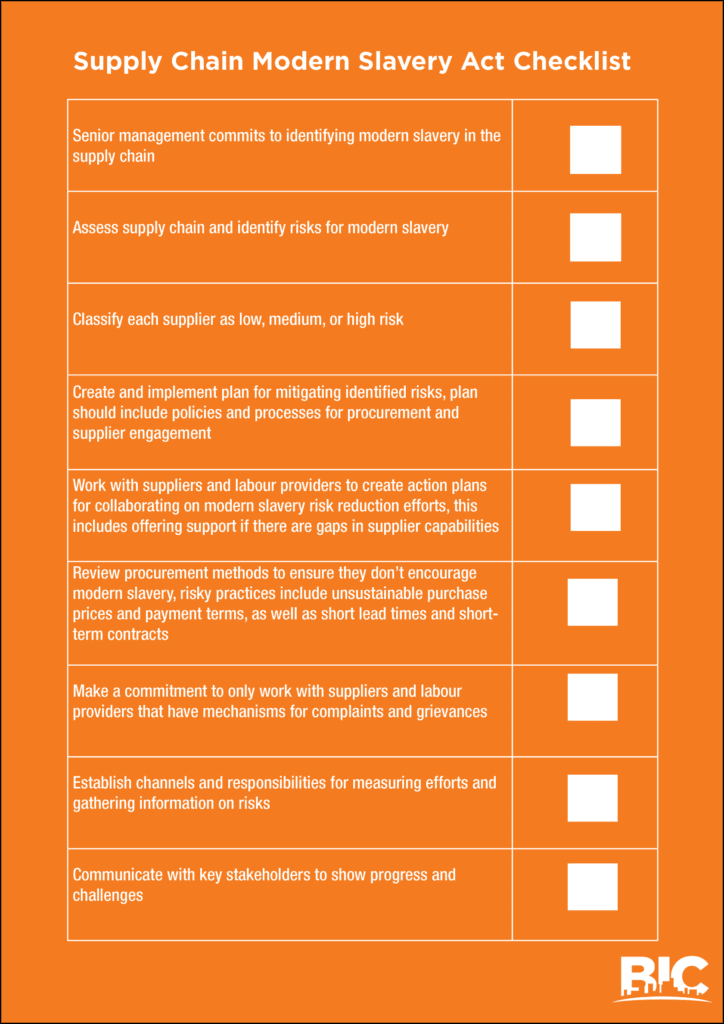 When it comes time to source materials and products and enlist new services, your business has a responsibility to do its research and find responsible partners.

Corporations need to turn a profit, but opting for the cheapest possible product or service provider could mean someone is paying the price somewhere along the supply line. And, the decision to spend less could mean you end up paying with your brand’s reputation.

So, don’t just look within your own company. Look at your supply lines and make sure you’re contributing to an economy where people are paid for their work, and modern slavery is never acceptable.

To learn more about how BIC Services upholds our commitment, learn about our Modern Slavery Framework.

For more resources on addressing modern slavery in your business practices and supply chains, visit Stronger Together.